What is biogeocenosis? Its types and structure

Biogeocenosis is a combination of different types of living organisms (biocenosis) coexisting within a spatially limited and homogeneous in its abiotic properties of a territory (biotope) and interacting both with each other and with the biotope. 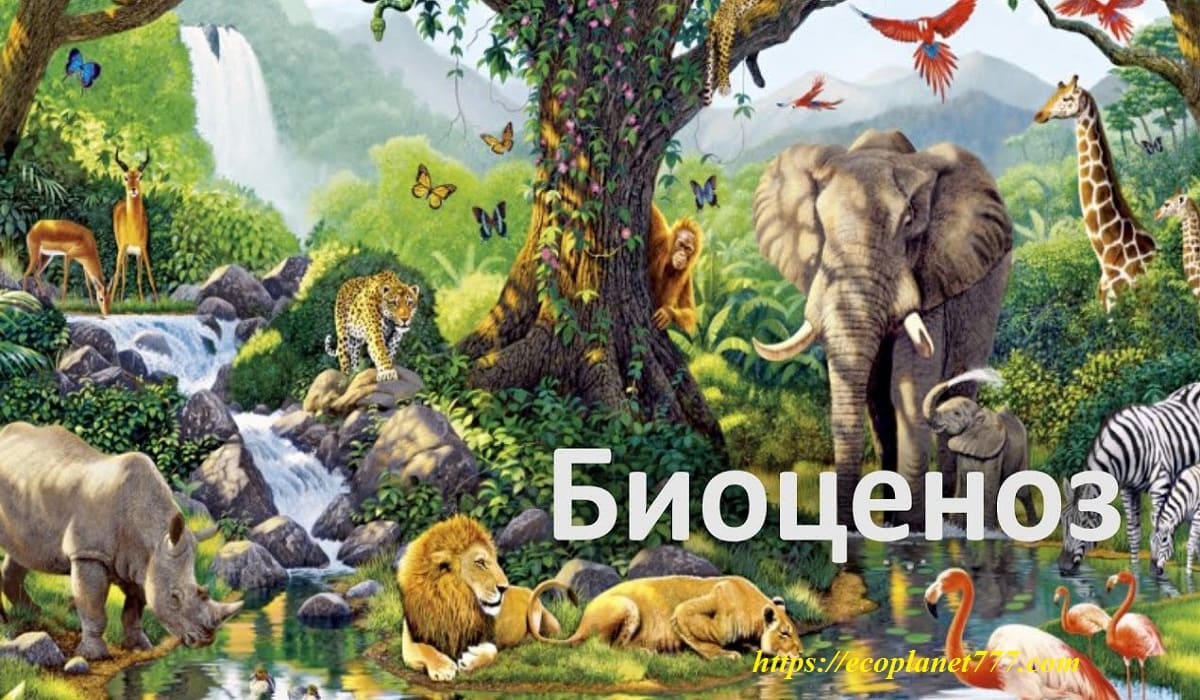 All components of any biogeocenosis are closely interconnected by the unity and homogeneity of the territory, the circulation of biogenic chemical elements, seasonal changes in climatic conditions, the abundance and mutual fitness of diverse species populations of autotrophic and heterotrophic organisms.

One can talk about the biogeocenosis of a birch grove, meadow, etc., but one cannot call a community of bacteria in a drop of dew on a blade of grass a biogeocenosis.

Biogeocenosis is understood as a community of living organisms (animals, plants, fungi and microorganisms) living together in a limited area and maintaining unity with the environment through biological circulation and metabolism.

The concept of “biogeocenosis” was introduced into scientific circulation by the Russian geobotanist and ecologist V. Sukachev in 1942. At the same time, this term was not widely used in foreign science, and biogeocenosis is considered there within the framework of the doctrine of ecosystems.

It follows from the above definition that biogeocenosis is an elementary natural ecosystem in which the ecological unity of living and inanimate nature is concentrated: biocenosis and ecotope. 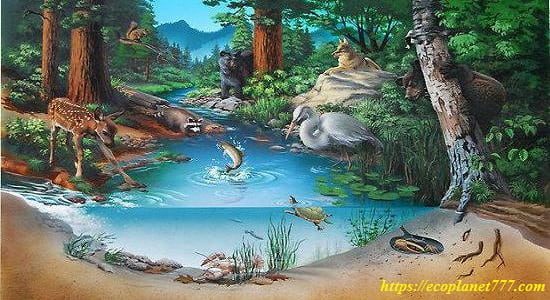 If we consider the meadow, as an example, we can see the whole process of biogeocenosis.

The grasses and shrubs that grow in the meadow are the primary producers using the process of photosynthesis.

Animals, insects and birds that feed on these plants are consumers, and they, in turn, become food for predators. Microbes recycle the remains and waste, which again become suitable for plants.The flora of forests (phytocenosis) differs from the steppe or meadow in the presence of tiers, and the inhabitants of the upper tiers receive much more solar energy than the inhabitants of the lower tier, who feel quite comfortable in the shade.

The biogeocenosis system is a collection of plants, animals, microorganisms and fungi. The main components are carbon, oxygen, sunlight and living organisms. The sun provides the necessary influx of energy, resulting in a cycle of energy. It is transmitted from protozoa to heterotrophs.

Biogeocenosis is divided into 2 types:

It is characterized by the absence of the influence of human activity. Self-regulatory mechanisms operate in it, due to the structure of the community and its environment. Human intervention disrupts these mechanisms and causes the extinction of some species of animals and plants.

The natural ecosystem is:

It is formed in places created by human hands to meet personal or social needs. The conditions in such complexes are set by man. The artificial view is divided into:

Agrobiocenoses are a set of organisms that form on land plots used by people for agricultural purposes (planting, sowing cultivated plants). The flora of such a biogeocenosis is limited to one species grown by man and several weeds. Among the animal world, only those species are observed that can feed on these plants and exist in conditions of agrobiocenosis. The system is directly dependent on human activities (fertilizer application, tillage, irrigation). Biogeocenosis without human influence self-destructs. Cultivated plants are more capricious than wild ones.

Urban – a kind of anthropogenic ecosystems. The species composition of the plant world is determined by man.Features of urban biogeocenosis are determined by environmental conditions that are inherent in cities. These are changes in air humidity, soil composition, illumination, wind direction.

The term “ecosystem” was first proposed by the English ecologist A. Tensley in 1935. Ecosystems are considered the main structural units of nature on Earth.

An ecosystem is a biological system consisting of living organisms and their habitat, connected by a set of connections that exchange matter and energy between them. To designate such systems on homogeneous land areas, the Russian geobotanist V.N. Sukachev in 1942 proposed the term “biogeocenosis”

Biogeocenosis (from the Greek bίos – life, gé – earth, koinós – general) – a biological system that includes a community of living organisms (biocenosis) and a closely related set of abiotic environmental factors (biotope) within a homogeneous territory, interconnected by the circulation of substances and the flow of energy.

As can be seen from the above definition, biogeocenosis includes two structural parts – biocenosis and biotope. Each of these parts consists of certain components that are interconnected.

Biogeocenosis and ecosystem are close concepts denoting biosystems of the same level of organization. However, they are not synonymous.

Biogeocenosis differs from an ecosystem in its territorial limitations. Its boundaries are determined by the ground vegetation cover (phytocenosis). The change in vegetation indicates a change in conditions in the biotope and the border with the neighboring biogeocenosis. For example, the transition from woody to herbaceous vegetation indicates the boundary between forest and meadow biogeocenoses. Biogeocenoses are distinguished only on land, since soil is their obligatory component. 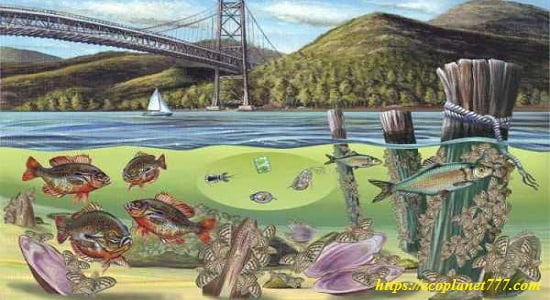 Among the living components in a biogeocenosis are autotrophic organisms (photosynthetic green plants and microorganisms) and heterotrophic organisms (animals, fungi, many bacteria, and viruses), and among the most inert components are the layer atmospheres around the earth, with its gas and thermal resources, and solar energy; and soil, with its water and mineral resources.

The first category includes soil, water, air, various minerals, etc. In the second – living organisms that inhabit the biosphere of the Earth.

These organisms are divided into:

All of them in their own way participate in the energy balance and metabolic processes, maintaining a close relationship with each other.

Thus, producers (mainly green plants) produce organic substances by photo- or chemosynthesis, which, in turn, are used as food by consumers (mainly herbivores and omnivores).

The last link in the food chain are decomposers (mainly fungi and bacteria) – they decompose dead organic matter and process it into inorganic or simple organic substances.

Reducers also become food for producers, after which the cycle resumes.

The most significant in the processes of biogeocenosis are insects, worms, lizards, spiders, etc. They perform one of the functions necessary for the entire process of biogeocenosis – the processing of dead remains and waste. So are the types of invertebrates that feed on the roots and tubers of plants; terrestrial, feeding on leaves, flowers, seeds, tree bark and carnivorous or predatory invertebrates that feed on animal biomass, animal juices, and blood-sucking belong to these processes.

Mice, marmots, moles are animals that live in the soil, for their life they need to dig holes and passages, due to which the soil is loosened and enriched with oxygen.

By eating some animals – others, there is a proper process of regulation of the number of certain species and the balance and balance in nature is maintained.

According to the method of survival and vital characteristics, biogeocenosis plants are divided into three groups:

Plants of the first group grow in territories without competition, these are either new or, on the contrary, destroyed places. They do not have large reserves of organic matter, highly prolific. Examples: Ivan-tea, dandelion, meadow maryannik, weeds.

The second group includes plants capable of competition, with a well-developed root system. They can be attributed to the fundamental niche of ecology. Examples: wormwood, nettle, reed. 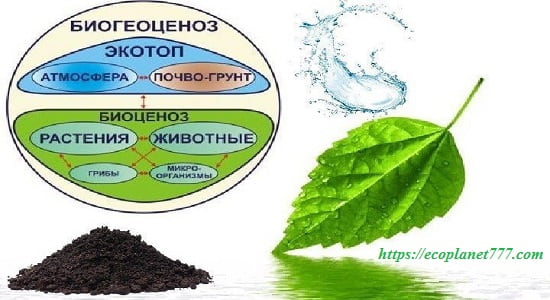 It can be understood from the figure that living organisms are surrounded by an abiotic environment that has a direct or indirect effect on them.

The factors of this environment are:

The transition from one plant community to another occurs gradually as natural conditions change. A classic example of biogeocenosis is a deciduous forest or lake.

It implies a variety of living organisms, their composition and quantity. The reduction of one species threatens the existence of biogeocenosis.

Populations are distributed in tiers, depending on their needs. Most often, layering is determined by plants. Animals contribute to the dispersal of seeds and pollen.

The ratio of living beings depends on the inorganic environment.

Animals in the same biogeocenosis serve as food for each other. Complex food chains form food webs.

Since biogeocenoses have been formed for hundreds of years in a row, scientists periodically introduce new components into their structure.

Trophic (food) level – a complex of organisms with the same type of nutrition, occupying a certain position in the food chain.

A food chain is a sequence of living organisms capable of transferring nutrients and energy from producers (plants) to consumers (predators). Neighboring links of the food chain form relationships on the principle of “food – consumer”. That is, if one group of organisms becomes food for another group, the links will be linked.

Individuals of the same species can occupy several trophic levels depending on food sources (for example, a polar bear, consuming berries, is considered a first-order consumer, but, eating a rodent, becomes a second-order consumer).

The top of the food chain is usually occupied by top predators, which, as a rule, do not have serious enemies (for example, a crocodile or a shark).

The energy contained in some organisms is consumed by other organisms in the process of the circulation of substances. The transfer of energy and food from its source – autotrophs (producers) through a number of organisms occurs along the food chain, by eating some organisms by others. A food chain is a series of species or their groups, each previous link in which serves as food for the next.

Food chains are divided into:

Detritus food chains are decay chains that use dead remains as the main food source. Organic remains, or detritus, form the beginning of detrital food chains.

Meaning of the food chain:

Food chains are not isolated from each other. They interact with each other to form food webs. A food web is a conditional figurative designation of trophic relationships between producers, consumers and decomposers in a community. Evaluating the schemes of food chains, it can be noted that each organism feeds only on some specific organism. In fact, this is not always the case. As a rule, living organisms can use organisms from different populations as a food source. Even organisms from adjacent food chains can act as a component of nutrition for them. Thus, intertwining of food chains with the formation of food webs is possible.

The main properties of biogeocenosis are: