The Redwing, named after its carmine wings, is the smallest thrush in Kazakhstan. A social nomad, this berry-loving bird visits only in winter, with only a few breeding pairs staying throughout the year. 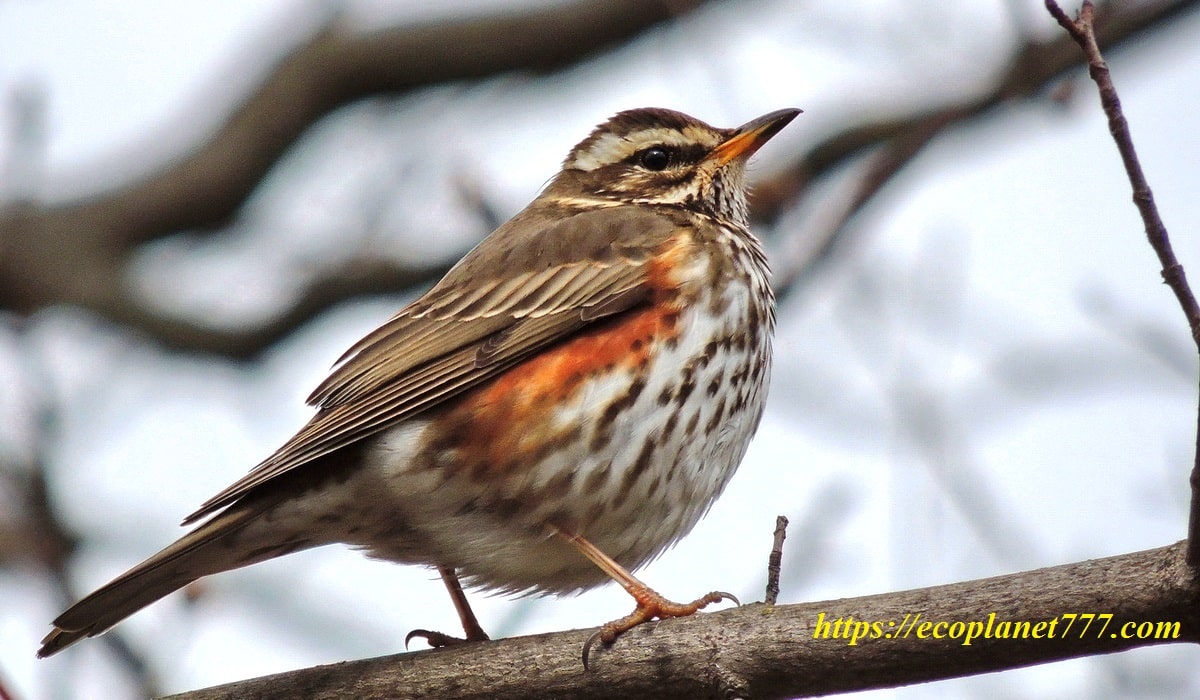 Adult redwings in breeding plumage are olive-brown with dark forehead markings. The eye brows are broad pale white from the bill. The neck has pale or rust-colored spots; the ear covers are brown. The underside is white, with dark longitudinal stripes on the throat, crawl and abdomen. The throat and mid-ventral region are white; the flanks and axillae are rusty brown. The flight feathers and its plumage are dark brown with an olive-gray tinge to the outer web. The middle plumage has reddish-brown terminal spots, but the larger plumage has white spots. The tail feathers are brown with an olive tinge to the central pair. 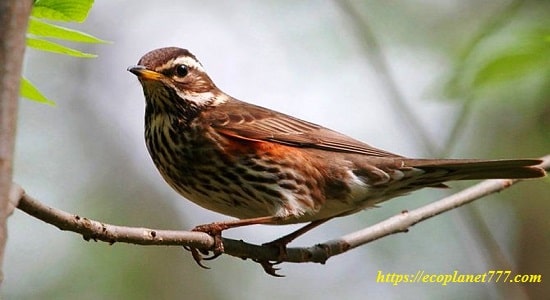 The bill is dark role and the underside of the lower mandible is yellowish. The legs are pinkish yellow and the claws are pink. Plumage color in the fall is similar to that of the spring, but all colors are darker. Young birds are olive-brown above with yellowish arrow-shaped spots and black edges. The shoulder feathers have long axial stripes. The underside is white with a slightly yellowish spot on the chest. The sides of the head, neck and body, crawl and breast have rounded black spots. Juveniles are well distinguished from Song Thrush juveniles by the neat coat pattern, the blackish spots, and the contrast of the white eye brows with the blackish lungs and crowned ventral surface. Size: wings 110-122, tail 75-86, tarsus 27-31, bill 14.5-18.5 mm. Weight: about 60 g.

The Redwing breeds in the middle reaches of the Ural Valley. Recently, it has appeared in the upper reaches of the Bukhtarma River in South Altai and the Uba River basin in Western Altai. There are indications that it has accidentally bred in the Naurzum pine forests and Borovoye in 1985.

During migration it emerges eastward from the Volga-Ural region and Mangyshlak up to Semipalatinsk and the Ayaguz delta it was observed once on October 16, 1983 at Lake Markakol. In the Kurgaldzhin Reserve, single records were made on 25 April and 3 May 1969, 19 October and 3 November 1959. one bird was observed in Karkaralinsk at the end of November 2003. During the warm winter, singles were recorded near Mangyshlak, Shymkent and Tashkent.

The Redwing is a rare breeding migratory bird. It inhabits poplar forests with bushes and dead branches, or old willow forests with dense grasses; during migration it visits woods, gardens and riparian forests. It emerges in April and its migration in the southern region ends in early May. Breeds in pairs in breeding areas. Breeding takes place separately at distances of 70-500 m from each other. 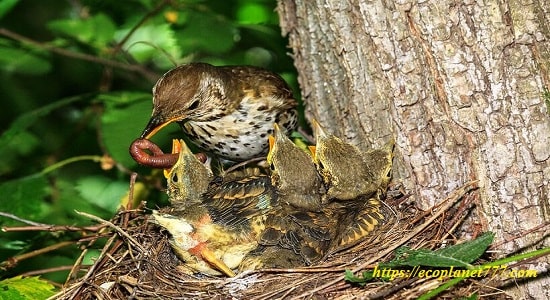 Nests are built on the ground under grass or dry branches, or in trees (poplar, willow or elm), in bushes or on stumps 4 m (usually less than 2 m) above the ground. Only females build their nests in 3-7 days with hay mixed with soil and clay and lined with hay, plus dried leaves, tough bark and hair. Nests are built from the end of April to the beginning of July, with 4-7 nests per clutch, usually 5-6.

Only the females incubate for 9-12 days. Both parents feed their young from the end of May to the end of July, and the young emerge 12 days later. When flooding occurs earlier, some pairs have two broods of chicks per season. Repeat breeding is common (from Hooded Crows and Magpies) after the loss of the first nest. In autumn, redwings migrate in small flocks or dozens of birds during September-October, with the most recent birds being recorded at the end of November.