Why does an earthquake happen? Causes and consequences

Earthquakes are sudden, rapid shaking of the earth caused by the breaking and shifting of rocks beneath the Earth’s surface. 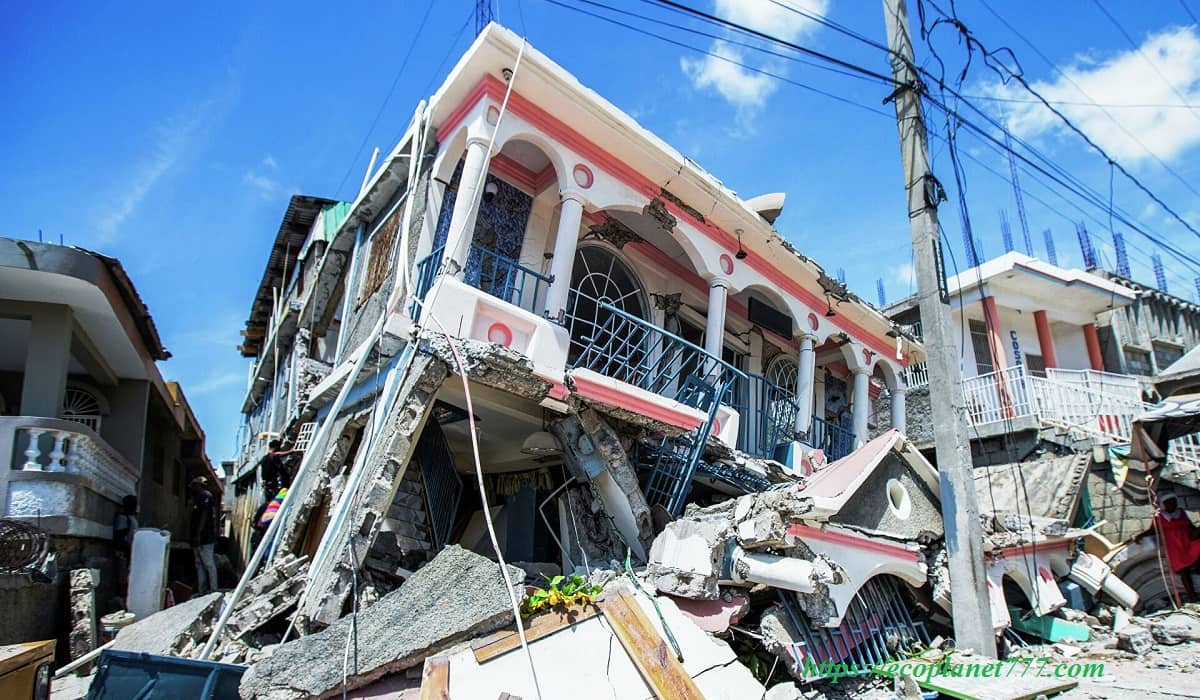 Earthquakes are more common in some parts of the world than others because some places are on top of a point where two plates meet or break. When these plates come into contact with each other and cause an earthquake, the results can be deadly and devastating.

The essence of the earthquake

An earthquake is the sudden sliding of tectonic plates along a fault. They always move slowly, but sometimes get stuck on their edges due to friction. When the tension at the edge overcomes friction, an earthquake occurs, releasing energy in the form of waves that travel through the earth’s crust and cause tremors that we feel, sometimes hundreds of kilometers away.

When an earthquake occurs, rocks break and slide along a crack in the ground. Sometimes after that, people feel tremors for several hours, or even days.

With the current state of scientific knowledge, it is not possible to determine the signs or predict earthquakes and, of course, it is impossible to pre-determine their exact date, time and place.

An earthquake can happen anywhere at any time.But history shows that over time they occur mainly in three large zones of the earth: the circum-Pacific seismic belt, the Alpine and the Mid-Atlantic ridge.

Some countries that are at risk are working to minimize damage and injury by implementing state-of-the-art seismic standards so that people are protected whenever and wherever an earthquake strikes.

Although there have been documented instances of unusual animal behavior prior to earthquakes, no reproducible link has been established between specific behavior and the occurrence of an earthquake. Because of their finely tuned senses, animals can often feel an earthquake in its earliest stages before humans can. But animals also change their behavior for many other reasons, so you should not rely on this method as a warning sign against such natural disasters. 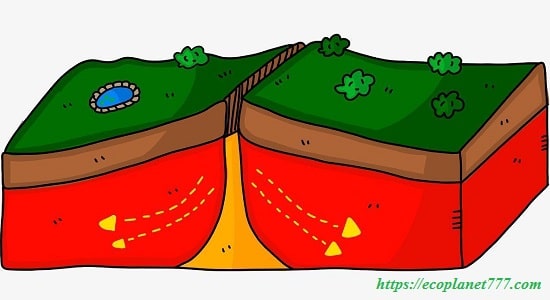 Earthquakes can occur naturally or as a result of human activity.

Seismic waves are produced when some form of energy stored in the earth’s crust is suddenly released, usually when masses of rock pulling on each other suddenly collapse and “displace”.

There is a slow deformation of the outer fragile parts of the “tectonic plates”, the outermost layer of the earth’s crust and upper mantle.Due to the heating and cooling of the rock below these plates, the resulting convection causes the adjacent overlying plates to move and deform under great stress.

Sometimes huge energy can accumulate within one plate or between adjacent plates. If the accumulated stress exceeds the strength of the rocks that make up these brittle zones, the rocks can suddenly collapse, releasing the stored energy in the form of an earthquake.

Minor earthquakes, at times, are caused by human activities such as: mining (rock bursts and cave collapses), filling reservoirs behind large dams, and pumping fluids into wells for oil extraction or waste disposal. Large dams hold back huge amounts of water. Some of this water can seep into cracks in the underlying rock, and this sometimes causes small tremors under the reservoir.

After an underground nuclear explosion, earthquakes are often recorded near the test site. This is due to the destruction of the cavity formed as a result of the explosion.

Artificial earthquakes always occur near the place of activity.

This zone of the strongest earthquakes in the world extends along the Pacific Ocean, where about 81 percent of the largest earthquakes in the world occur. This belt extends from Chile north along the coast of South America through Central America, Mexico, the west coast of the United States, southern Alaska, through the Aleutian Islands to Japan, the Philippine Islands, New Guinea, the Southwest Pacific island group and New Zealand.

stretches from Java to Sumatra through the Himalayas, the Mediterranean Sea and the Atlantic. This belt accounts for about 17 percent of the world’s largest earthquakes, including some of the most destructive.

The rest of the points are scattered around the world.
Earthquakes in these prominent seismic zones occur most often, but shocks sometimes occur outside of these areas. Examples in the United States are New Madrid, Missouri, and Charleston, South Carolina. However, the interval between such destructive shocks can be from several decades to centuries.

The consequences of earthquakes 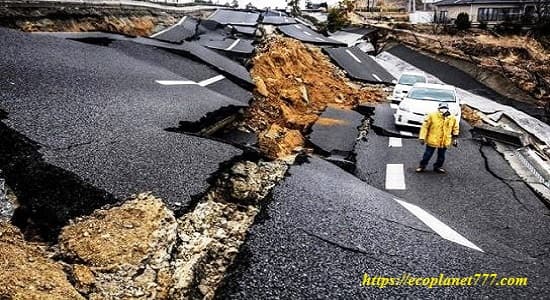 When an earthquake occurs in a community, it can cause death and injury, as well as significant property damage.Most ground shaking injuries result from collapsed walls or floors, flying glass, and falling objects or people.

Earthquake damage depends on the strength of the ground shaking and the ability of the structure to withstand this shaking.

Classes and strength of earthquakes

There are about 50,000 earthquakes every year all over the Earth, strong enough to be noticed without the help of instruments. Of these, about 100 are strong enough to cause significant damage if their centers are near residential areas. Very strong earthquakes occur on average about once a year. For centuries, they have been responsible for millions of deaths and untold property damage.

Earthquake magnitude is determined using the Richter scale (earthquakes of magnitude 3 or less are difficult to detect, while magnitude 7 causes severe damage over large areas).

Weak or moderate earthquakes can last only a few seconds and do not pose a serious danger to people. There may be slight rattling of objects in the house, you may feel a slight tremor and excitement under your feet.

Strong earthquakes can last up to several minutes and constitute a natural disaster if their epicenter is near a densely populated area. Their scale of destruction is quite large and dangerous for this particular region.

The ground or floor will move quite strongly. You will probably feel a shiver, followed by a rolling, like in the sea. People feel dizzy and sometimes unable to walk during an earthquake.

If you live in a high-rise or multi-story building, you may experience more sway than in a one-story home. The lower floors will shake violently, like in small houses. On the upper floors, the movement will be slower, but the building will move further from side to side.

Furniture and loose objects can fall, slide across the floor, or be thrown around the room with destructive force. Loose fixtures and ceiling panels may fall, windows may break. Fire alarms and other emergency systems are sometimes activated. The electricity goes out frequently.

Earthquakes can occur in volcanic regions and are caused there by both tectonic faults and the movement of magma in volcanoes.
Such earthquakes can be an early warning of volcanic eruptions.

The seismic activity of numerous volcanoes is closely monitored for warning signs of an imminent eruption. Large volcanic eruptions can release a huge amount of energy that can be recorded by seismographs even far from the source.

Worldwide, most volcanic eruptions and earthquakes occur in the same areas. This relationship is explained using a geological model called plate tectonics.

What to do in case of an earthquake?

Wherever you are, when an earthquake hits, take cover immediately. If necessary, move a few steps away from tall buildings to the nearest safe place. Stay there until the shaking stops.

If you are indoors: Leave this hideout and run outside as soon as possible. Otherwise, while covering your head and torso, take cover under heavy furniture such as a desk, bed, or whatever to avoid being hit by falling objects.

Hold on to the object you are under to stay covered. Be prepared to move with the subject until the shaking stops.

Stay away from windows and shelves with heavy items.

If you are in an elevator during an earthquake, press the button on each floor and exit as soon as possible.

To prepare for an earthquake, you must be aware of the risks that are specific to your area. Walk around your house, imagining what could happen to each part of it if it was shaken by a strong earthquake.

Store heavy items on lower shelves.Securely attach mirrors, paintings, and other hanging items to prevent them from falling off the hooks. Closed curtains and blinds will help prevent broken window glass from falling.

Place anti-slip pads under TVs, computers, and other small appliances, or secure them with another similar means.

Use security locks or latches on cabinets to keep contents from spilling out.