Saiga – an animal from the Red Book

Saiga is an animal – an antelope with an unusual appearance. His nose resembles a short trunk. The animal is unique in that it lived in the era of mammoths, about 50-70 thousand years ago, and we can see the animal even today. But, despite such a long history of existence, this species is threatened with extinction and extinction. 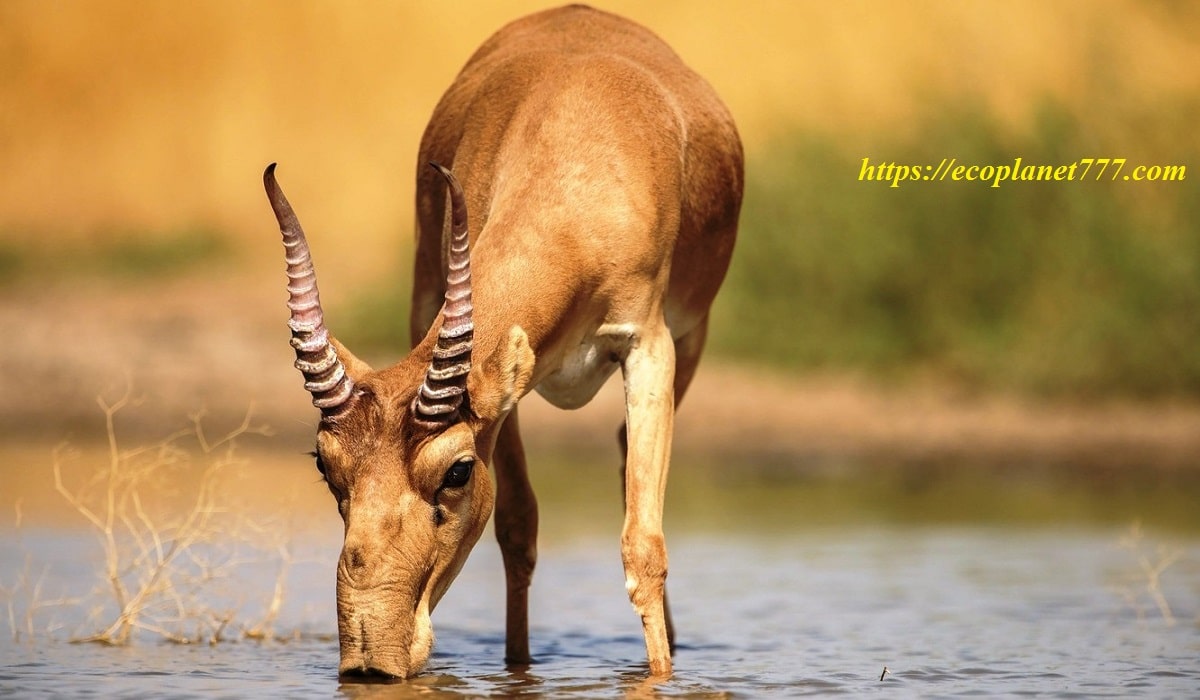 In 1549, in a document called “Notes on Muscovy”, the name “saiga” can be found for the first time. It primarily refers to the males of this species, while the females are called “saiga”. The international term comes from the Latin name of this mammal, which was worked on by the famous Austrian diplomat and historian Sigismund von Herberstein. The Russian name “saiga” comes from the Turkic peoples, who called artiodactyl animals “chagats”.

The saiga is an animal listed in the Red Book and unique in the first place for its appearance. Therefore, we begin the description with the most famous part of his body.

The most prominent feature of the saiga is its proboscis-like nose, with its nostrils pointing down and hanging over its mouth. The bone in the nose of the saiga has a rather complex, sinuous structure, and the nasal opening in the middle is lined with multiple hairs and glands. In each nostril is a special sac, which consists entirely of mucous membranes. The nose serves to warm and moisten the inhaled dry air.According to some reports, the saiga proboscis is also used for social communication and mate selection. Thus, saiga males make loud nasal sounds, which are special signals to scare away other males and at the same time attract females for mating.

An adult saiga is about 76 cm tall, 108 to 150 centimeters long and weighs 31 to 43 kg. Females are slightly smaller than males in size. The body of the animal is elongated. The coat of the saiga is short and pale brown in summer and thick and whitish in winter, with creamy white underparts. The male saiga has ribbed amber-yellow horns, lyre-shaped, thick and slightly translucent. They also have pronounced rings from 12 to 20 pieces. The length of the horns can reach 25-30 cm, and they grow until the age when the male is 1.5 years old. The females have no horns. This antelope has long, thin legs and looks somewhat like a sheep. Saiga also have a short tail. The ears of the animal are short, slightly elongated upwards. The eyes are yellowish-brown in color, located on the sides of the head at a fairly long distance from each other. Saiga have sharp eyesight and can see quite far away, which helps them survive in their habitat.

Where does the saiga live 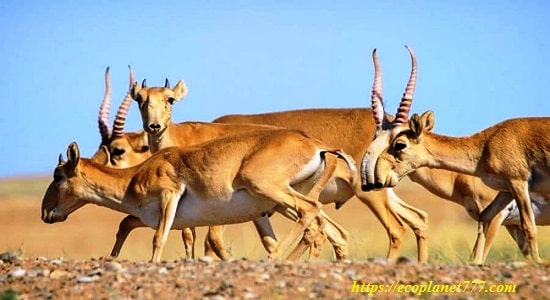 The saiga antelope (Saiga tatarica) is a medium-sized, artiodactyl Red Book animal of the antelope family that lives in herds in treeless steppe areas. Saiga prefer to graze on open dry steppes, semi-desert pastures and open areas free from dense vegetation, where they can freely survey the entire territory and quickly escape from predators. Previously, they were distributed from Poland to western Mongolia, but then the saigas were significantly reduced due to poaching and habitat destruction. Now the animal lives in parts of Asia, southeastern Europe, including countries such as southwestern Russia, Kazakhstan, Uzbekistan, Turkmenistan and Mongolia.

Saigas are known for their extensive migrations across the steppes. These antelopes cover long distances and even swim across rivers if necessary, but avoid steep or hard-to-reach areas. Saigas are highly dependent on changes in weather patterns and are subject to climate fluctuations due to their migratory nature. Frosty and windy winters with a lot of snow often make it impossible for saigas to feed on grass under a thick layer of snow. Therefore, the population drops sharply after severe winters. On the other hand, an increase in temperature in the steppe region leads to spring floods, in which young saigas often drown.

What does the saiga eat

The saiga antelope is a herbivore that feeds on about 100 different plant species. Saiga saigas love grass, forbs, lichens, summer cypress, saltwort, sagebrush and low shrubs growing in their habitat.Some of the plants the saiga eats are poisonous to other animals. In the summer, they feed in the mornings and evenings, and rest at noon. These are ruminants, they regurgitate their food and then chew it again. This helps the saiga get the most out of the food they eat.

Saigas are often preyed upon by wolves, their natural predators on the Asian plains. Young antelopes may be preyed upon by wild dogs and foxes. Thanks to a special feature of fast running, saigas sometimes manage to escape from predators in the steppes. 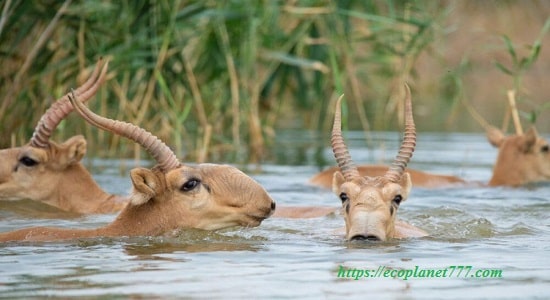 The saiga has been listed in the IUCN Red List as an animal under threat of extinction since 2001.

Saiga horns are often used in Chinese medicine and are the main reason why these animals are so widely hunted. Their cost is equal to the price of rhinoceros horns. Now hunting and trading in body parts of saigas is illegal, but despite this, horns can be easily found for sale in a variety of places. In the late 19th and early 20th centuries, saigas were killed indiscriminately for horns, meat, and skins, reducing them to a few small scattered populations.

The population of this unusual and charming animal has declined by 95%, one of the fastest recorded declines for a mammal. Despite its ability to endure the extreme conditions of nature, the saiga cannot withstand the growing threat from human activities, including hunting for its horns and meat, as well as habitat destruction.The Soviet Union banned hunting in 1921 and soon their numbers increased and expanded their range. Commercial hunting was resumed in 1951, but state-controlled agencies protected and managed the animals sustainably, and professional culling teams produced a modest catch each year. Thus, the number of saiga has steadily increased.

The number of animals then again fell sharply due to excessive poaching that followed the collapse of the Soviet Union. Some poachers have been known to chase fleeing groups on motorcycles, bringing down the saigas with a steel cable strung between the vehicles. Increased demand for different parts of the saiga body and relentless poaching has led to a high skew between the sexes – 100 females for each male, which has caused a catastrophic drop in fertility and is likely to have significant consequences in the future.

Among other ongoing threats to saigas, a few stand out: loss of habitat due to competition with livestock for space, lack of protection in some places, and migration barriers such as border fences.

These animals are also subject to a host of annual diseases and viruses that further threaten an already endangered species. For example, a dangerous “plague” virus destroyed a huge number of saigas, and a bacterial disease struck a large population of Russian saigas living in the pastures of Kazakhstan. In May 2015, when the saigas were in their breeding season, about 200,000 individuals died from a pathogenic bacterium. The alleged cause was a dramatic change in climate, when instead of cold weather it became unusually warm and humid, which served as an impetus for the development of dangerous bacteria.

The total number of saigas in existence is not known, but estimates are between 50,000 and 124,000 individuals. Previously, their population numbered in the millions.

Since 2002, the International Union for Conservation of Nature has classified the saiga as endangered. This animal is listed in the IUCN Red List.

The saiga’s permanent habitat countries – Russia, Kazakhstan, Uzbekistan, China and Mongolia, as well as the US and the UK are planning to create an international organization to strengthen the protection of the saiga in its natural habitat.

Saigas prefer to be diurnal (i.e. active during the day). In the daytime, animals feed on a variety of vegetation and drink water. In the evening, they dig small holes in the ground, which serve as a refuge for them and a place to rest. They are social antelopes that live and migrate in herds. They have the most spectacular migrations in the world! They often migrate throughout the year looking for good pastures and water sources.In autumn, herds may move south to avoid snow, and they prefer to mate in December. Saiga antelopes can easily travel long distances in herds and even swim across rivers, unlike other antelopes. Some groups cover from 80 to 120 km a day! If necessary, they can run at a speed of about 80 kilometers per hour.

Saiga antelopes are social creatures known to use body language to communicate with their own kind. They have also been known to use loud nasal snorts and roars to demonstrate their physical strength and attract females. It is also suggested that saigas use urine marks to mark their territory and to warn other males. 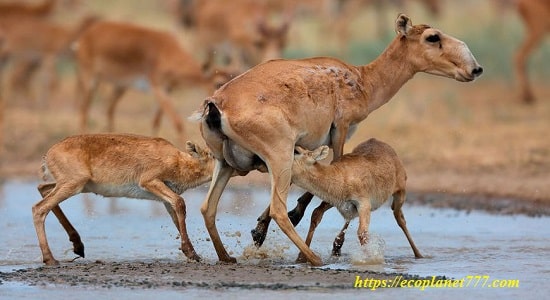 Female saigas are considered sexually mature at the age of 7 to 8 months, and males – from 2 years. The mating and breeding season usually lasts from November to December. During the mating period, the adult male attempts to control a group of 5-10 females, preventing the females from getting far and attacking any invading male. A single male can take over the leadership of a harem of even 30-50 females, which he has earned after a violent confrontation with another male during the mating season. These battles sometimes end in the bloody death of the loser, while the winner takes all. When the breeding season ends, male saigas become very weak, as they they do not graze at all during the breeding season and spend most of their energy protecting their females. As a result, male mortality can reach up to 90%.Since male saigas are also persecuted for their horns, this often means that there are not enough males to mate with females during the mating season.

Pregnancy lasts from 140 to 150 days. After a five-month pregnancy, females give birth to one or two cubs (birth weight -3.5 kg), which hide in the grass for four to eight days. Lactation lasts four months. Newborn saigas start grazing at 4-8 days of age (completely weaned at 4 months of age).