The name “glass frog” comes from the white translucent skin on the abdomen, where the frog’s beating heart and other organs are visible. Elsewhere, its skin is usually pale green with small yellow suckers on its fingers and toes. 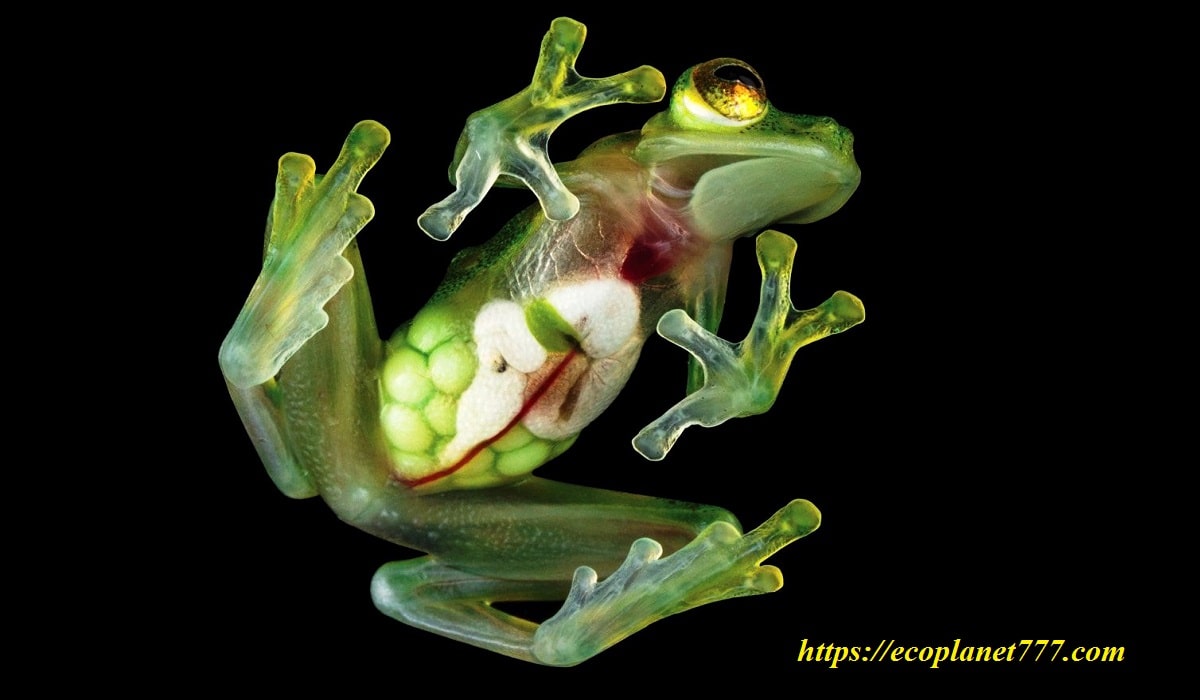 The glass frog is the generalized name for a group of amphibians belonging to the same family, the Centrolenidae. It was called glass due to the fact that this species has translucent skin on the abdomen. These tree-dwelling nocturnal frogs hide on the undersides of leaves during the day.

A small frog jumps from one leaf of a plant to another, exposing its small abdomen as it flies. During the flight, you can see some of her internal organs, including her beating heart. The frog has a short snout and golden irises.

Scientists are still not sure why these frogs have transparent skin on the underside of their bodies. But they think that the spotted pattern on the backs of amphibians must resemble a mass of eggs. This camouflage helps males protect their offspring by confusing predators trying to reach the clutch.

The habitat is the tropics of Central and South America.

Appearance of the glass frog

The size of individuals depends on their species. Smaller species usually have a length of 2.1 cm, large ones can reach 7.5 cm. in length.

The bodies of glass frogs are usually bright green or olive green. The trunks may be covered with black, white, blue or green spots. The belly of the glass frog has translucent skin.

Their average lifespan in the wild typically ranges from 10 to 14 years.

Where does the glass frog live?

Reticulated glass frogs are most common in Central and South America, especially among the rainforests of Costa Rica, Panama, Colombia, and Ecuador.

Their habitat is typically moist lowland forests, usually near streams or rivers.

The glass or “transparent” frog is a special type of frog, so named because of the presence of a translucent skin. There are about 60 varieties of their species. Glass frogs prefer to inhabit rainforests with high humidity, choosing treetops near water. Some of their species are endangered due to the loss of their habitat.

They can sometimes be found on low hanging branches near running water where they lay their eggs.

What does the glass frog eat? 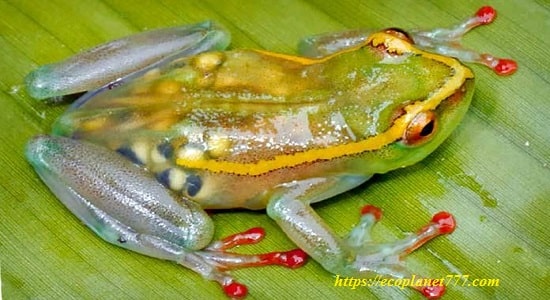 A reticulated glass frog, similar to the red-eyed leaf frog, which is considered a carnivore. The diet includes soft-bodied insects, as well as various types of spiders. The main food is small insects such as crickets, bloodworms, various flies, spiders and even other small frogs.

Glass frogs are an important part of the entire ecosystem as they are good at controlling insect numbers.

Male glass frogs can occupy fairly large territories, making squeaking sounds to warn “invading” individuals to stay away from their habitat. If the enemy does not leave, the frog will fight him to show who is the boss in the house.

These animals are active at night and inhabit vegetation along streams.

The scientists concluded that the animal’s particular skin type is an excellent camouflage technique that prevents predators from easily spotting the glass frog (this is especially helpful when it sits motionless on leaves).

The glass frog can sometimes be confused with the tree frog. But, unlike the latter, this species has large forward-facing eyes.

Due to their small size, this type of frog is quite easy prey for large predators.The glass frog’s main natural enemies are some snakes, tropical mammals, and birds.

Glass frogs are nocturnal animals. They are especially active from dusk to early morning. Spends daytime hiding under leaves and among branches. At night, they go hunting and also look for a mate. Males have a distinctive mating call that increases in volume as they mature or become more dominant in their territory.

Reproduction of the glass frog 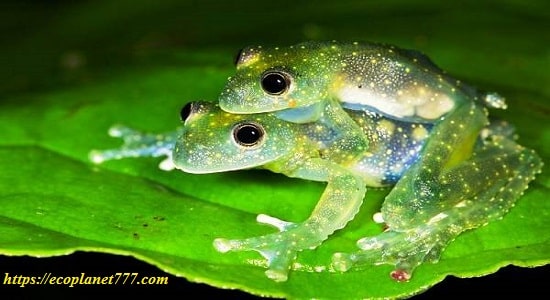 Glass frogs are arboreal animals (they spend most of their lives in trees). They descend to the ground only during the mating seasons.

Mating usually occurs during the cessation of the rainy seasons or during light showers.

Males are also very protective of their females’ eggs. The glass frog lays a clutch of 18–30 eggs on the underside of leaves or branches near running water, sticking them with a jelly-like substance. Males guard the eggs by protecting them from predators and keeping them moist. They also incubate when they lay their body on top of their eggs to further protect them from predators such as wild wasps. When the eggs hatch, the tadpoles fall into the stream or river below, where they develop into frogs.

Some species of glass frogs burrow into the ground until they mature into adult frogs. Other species undergo metamorphoses in water.
Male glass frogs are highly territorial monitors throughout the rainy season.Territories are created with specific signals, such as a peep, to create a new territory or to defend an established area.

“If all predators cannot see through a frog, then why do glass frogs need transparent skin instead of camouflage patterns like other tree frogs?” said Dr. James Barnett, research fellow at McMaster University in Canada, co-author of the study.

Barnett and other scientists say they have solved the mystery. “The frog is always green to blend in with the leaves, but leaves differ in their color saturation,” Barnett said. Although the color scheme of the frog’s body changes little depending on the darker or lighter foliage, its legs remain more transparent and therefore change brightness, helping amphibians to camouflage themselves.

“Thanks to the translucent legs and thighs, the edges of the frogs’ bodies turn into a slightly blurred gradient textured from leaves to feet and back again,” Barnett said, noting that this makes the frog’s outline less recognizable to predators.

In an article for the American journal Proceedings of the National Academy of Sciences, Barnett and colleagues report how they performed several experiments. In the first, they photographed 55 pieces of glass frogs on green leaves and an all-white background, and then used computer models to compare the color of the frog in each case. “We found that the body colors of the frogs didn’t change much between backgrounds, but their legs changed the most,” Barnett said, adding that this was due to a change in the brightness of the color, not its hue.

The results were the same when they simulated how different types of animals (including snakes, birds) and humans can see these frogs. “The camouflage effect was the same for both humans and glass frog natural predators,” Barnett said.

A team of researchers made 180 translucent and 180 opaque gelatin frogs and placed them in the forests of Ecuador. During 72 hours, 53 opaque and 24 translucent frogs were eaten by predators.

“Our study shows that transparency helps glass frogs camouflage themselves from predators, but not as effectively as completely transparent species,” Barnett said.