The king penguin is the second largest penguin on the planet. In fact, this bird got its common name from the belief that it was the largest of all penguins – which was refuted in 1884 when its close relative, the emperor penguin, which may be taller, was recognized as a separate species. 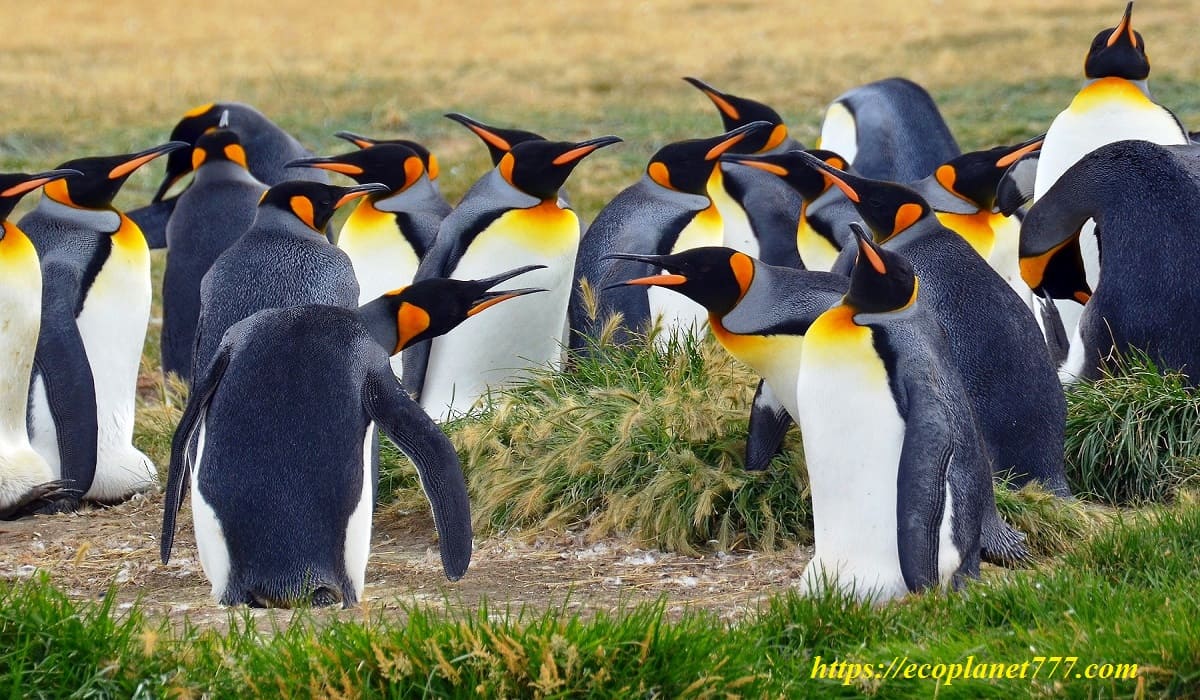 Average weight of an individual: 15 kg.

King penguins have colorful neck and head feathers, which in itself makes them the most colorful of all penguin species.

The breeding season for this species starts from November to January. They have a complex breeding system in which individuals raise only 2 chicks for 3 years.

Recent estimates put the world population of the king penguin at 2 million breeding pairs, with other estimates as high as 3.2 million.
Diet and feeding: mainly fish, but sometimes there are squids in the diet, caught at a depth of 50 – 100m. They eat very little, which is not typical for other Antarctic animal species.

Predators: Leopard seals are the main predators of adult penguins. Skuas prey on eggs and chicks.

As with many penguin species, the fledgling king penguin chicks appear to be larger than adults. When describing this population of penguins, early explorers and seal hunters sometimes referred to them as “woolly penguins” because the juveniles’ thick brown down is similar to sheep’s wool. Some researchers even thought it was a separate species at first, and this impression was reinforced by their complex breeding process, which means that the chicks are around almost all year round.

The easiest way to tell this species apart from the other 17 penguin species is the orange-yellow feathers on the top of their chest and teardrop-shaped colored patches on both sides of their heads. Some other penguins also boast yellow feathers, but not as prominently as the king penguin.

Male king penguins are somewhat larger than females, but outwardly both sexes look almost the same. However, chicks boast fluffy dark brown plumage that is so different from adults that they were once considered a separate species known as woolly penguins.

Where do king penguins live? 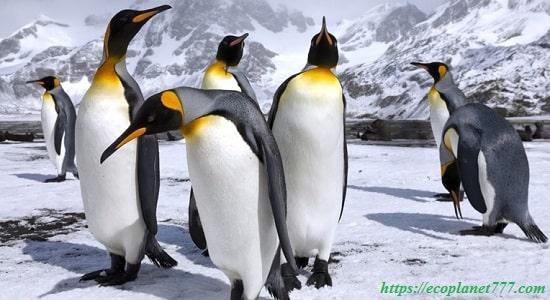 While most people tend to think of Antarctica when they think of penguins, king penguins actually live and breed on a number of islands just north of the southernmost continent. They are known as the subantarctic islands. On land, the birds prefer coasts and valleys that are free of snow and ice, and are usually found near the sea.

King penguins live on most of the subantarctic islands, with the largest colonies currently living on Crozet Island (in the southern Indian Ocean), as well as on the Kerguelen, Prince Edward Islands (Canadian province) and South Georgia Islands (British territory).

There are two subspecies:

There are significant differences in size between penguins from different populations living on different islands, and there is evidence of genetic isolation (i.e. very little or no interbreeding) between colonies.

What do king penguins eat? 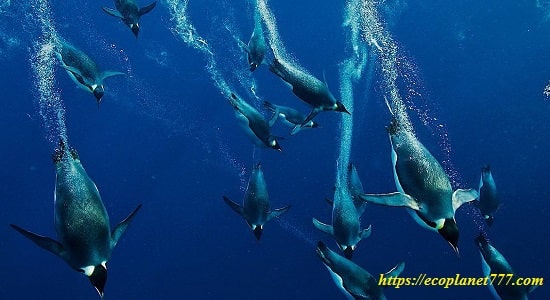 King penguins are epic hunters, harvesting up to 2000 fish in one day. Birds use large flippers to swim at six miles per hour in pursuit of fish and squid. Sometimes diving to a depth of more than 100m is required to search for prey. is about the same depth as the height of the Eiffel Tower. This part of the ocean is known as the dysphotic or twilight zone, and it gets darker as it sinks. To hunt in such conditions, king penguins have excellent night vision, although they spend most of their hunting during the day.

Of course, king penguins also have to beware of their own predators. In the ocean, these include killer whales, leopard seals, Antarctic fur seals, and South American sea lions. On the rocky shores they call home, king penguins must also protect their eggs and chicks from avian predators such as giant petrels, skuas, lesser shield whales, turkey vultures and caracaras.

The International Union for Conservation of Nature lists king penguins as a species of Least Concern.This means that with a relatively large range and a global population of about 1.1 million breeding pairs per year, this species is not currently threatened with extinction.

However, research suggests that climate change may threaten some king penguin populations in the future. Rising sea surface temperatures are affecting the movements of prey species, and it can be assumed that king penguins, especially in the southern Indian Ocean, will soon have to travel long distances to find the same amount of food. The scientists also speculate that changing temperatures could cause the fish species in their diet to dive even deeper into the ocean, possibly pushing king penguins to the limit of their diving ability. 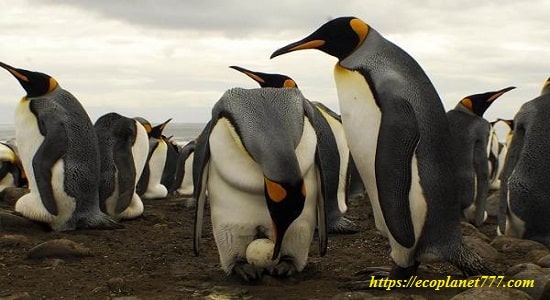 King penguins are similar to emperor penguins in that they do not build nests. Instead, the male and female take turns cradling the egg on their paws and keeping the young warm with a special piece of exposed skin known as a brood pouch.

The breeding cycle can last from 13 to 16 months. Female king penguins typically lay one egg each year, although breeding is often only successful once every two years. The eggs take about 54 days to incubate, after which the parents must continually return to the chick and regurgitate food into its mouth to help it survive the winter.

However, it’s a hard life and it’s not unusual for king penguin chicks to survive for several months waiting for food.

King penguins live in the Antarctic and subantarctic islands, not in the south. There are two separate groups: “early breeders” and “late breeders”. Early spawners lay eggs in November (early summer), which hatch around mid-January, chicks grow to reach about 90% adult weight by April when they become independent. An individual penguin may switch between early or late breeding.

Breeders lay and incubate their eggs from January to March, in late summer. Parental visits become less frequent during the winter and chicks have to endure blizzards and harsh conditions on their own. They huddle together in a crèche and keep themselves alive using their fat reserves, the parents return to feed them about once every four to six weeks.

However, up to 3 months can pass between feedings, and surviving chicks can even withstand a 5-month wait. During this time, chickens can lose up to 50% of their body weight.

When the king penguin cubs are fully fledged, they leave their colony where they were born. And from that time on, they already independently swim in the sea and catch food.

Young penguins cannot swim in the sea until they have shed their warm brown down, which is an excellent insulator in the cold but is very poor in wet conditions.

King penguins start breeding not until 3 years of age, when they usually return to their birthplace, and continue to do so throughout their lives, which can last up to 30 years.

Breeding is preceded by a molt when they shed their old feathers and replace them with new ones. Like juveniles, adult penguins cannot hunt fish until they have a new set of feathers. Therefore, during such a period of molting, penguins are starving and making the most of their fat reserves.

The return of adults to the colony does not occur en masse, as occurs with some other penguin species. This means that there is much less chance of finding the same mate again, which is why king penguins often change partners for each breeding cycle rather than pairing with the same mate.

King penguins have been found to be equipped with depth recorders.

They dive to a depth of at least 50 m on about half of their dives. They regularly dive deeper.

Cases of diving to a depth of about 500m have been recorded.Deep dives tend to occur only during the daytime, and only shallow dives are recorded at night, accounting for only a minority of dives.

King penguins prey on prey that emits light using bioluminescence. This way they can see when they are fishing at night.