The most prickly of rodents is the animal porcupine, the Latin name means “goose pig”. There are more than two dozen species of these wild animals, and they all have sharp spines to scare away and protect against predators. The spikes are modified hairs embedded in the musculature of the skin. 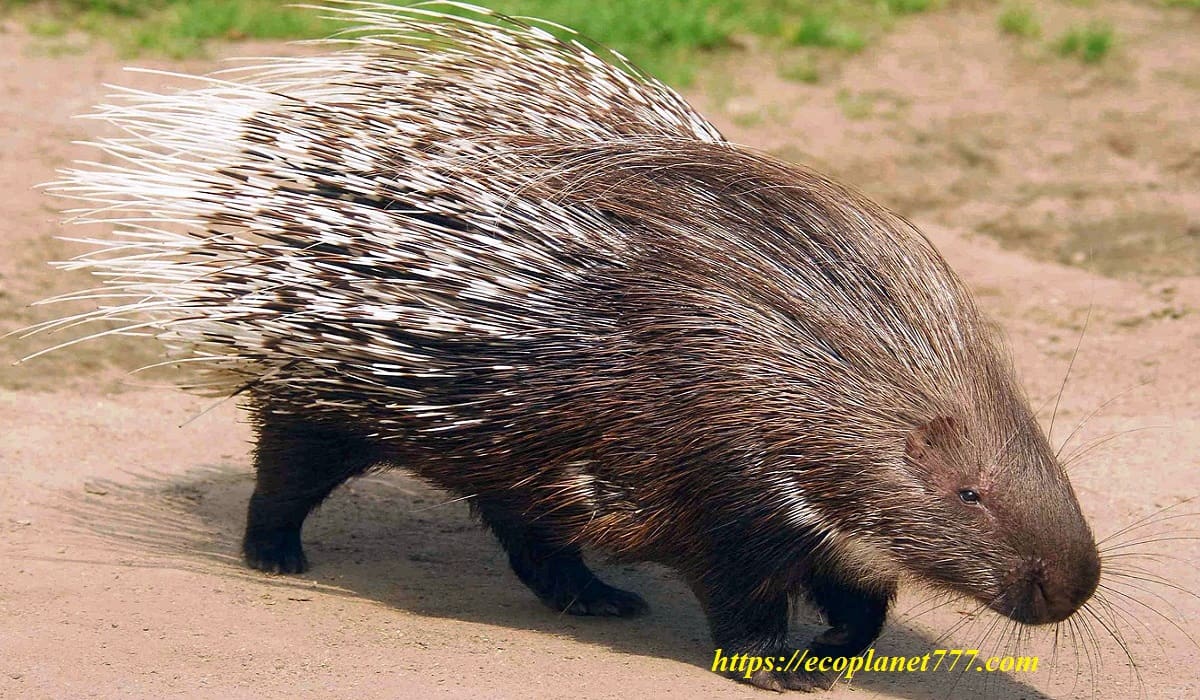 This animal is usually short in stature with short stocky legs. The color is from grayish-brown to black with variegated stripes on the spikes. It has a round body, small ears and a small head. The most recognizable feature of the porcupine is its quills. A porcupine can have up to 30,000 of them. Needles are hairs with notches at the ends. They are firm at the tip and base and hollow over most of the shaft. The porcupine is not an aggressive wild animal. He will only attack if he is in danger.

Porcupines have soft hair, but on the back, sides and tail, it is usually mixed with sharp quills. They usually lie flat until the animal is in danger. If necessary, they rise and serve as protection for their owner. Porcupines cannot shoot predators with them, as previously thought, but the quills are easily detached on contact.

any wild animals avoid encountering a porcupine because they already had bad experiences. The needles have sharp tips and serrations, making them difficult to remove if they are stuck in the skin of another animal. In porcupines, new spikes grow to replace the lost ones.

There are several differences between Old World and New World porcupines:

Old World crested porcupines have quills on their backs that can fit into a comb (like a hairstyle). The crest starts from the top of the head and goes down to the shoulders. They put their weapons on public display. Each feather is marked with black and white stripes. Some needles can reach 51 cm in length. 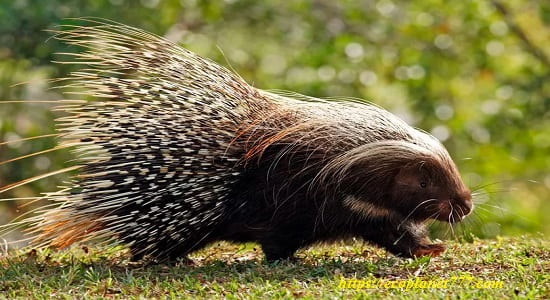 Smaller needles, 20 centimeters long, are tightly stuffed over the back of the Old World porcupine. They can strike at any potential threat. At the base of the tail, the porcupine has blunt, hollow quills that rattle when shaken as a warning to potential predators. If the noise doesn’t work, the porcupine may try to lunge backwards at the predator. When threatened, the crested porcupine stamps its feet, growls, and grunts to scare off the predator.

The quills of New World porcupines are much smaller (about 10 centimeters long) but are just as protective. At the end of each feather there is a small spike (like a fishhook) that clings to the flesh, holding it in the enemy’s skin. Porcupines can stand still in a defensive posture or attack an enemy. During fights, New World animals also chatter their teeth to sound fierce.

The needles are just modified hair made of keratin, the same substance that makes up our own hair and nails. The quills do not cover the underside of the porcupine. The animal has muscles at the base of each feather that allow them to stand up when the porcupine is agitated or alarmed.

The presence of quills does not mean that the life of a porcupine is carefree.Large cats, especially lions, and human hunters threaten porcupines.

There are still many myths and misunderstandings about these wild animals, as in ancient times. The philosopher Aristotle warned of the dangers of getting too close to a porcupine: the quill-bearing beast can “shoot its deadly needle-like arrows” from a great distance at hunters and dogs alike. Actually, this is not true!

New World porcupines live in North, Central and South America; some examples are the Canadian porcupine, the Mexican hairy pygmy porcupine, and the Brazilian porcupine.

They live in forests, including woodlands along rivers in the tundra, in meadows and desert areas. Their range extends from Canada to northern Mexico, absent from the southeastern United States.

Porcupines found in the Americas are good climbers and spend most of their time in trees. Some even have prehensile (grasping) tails to aid in climbing. 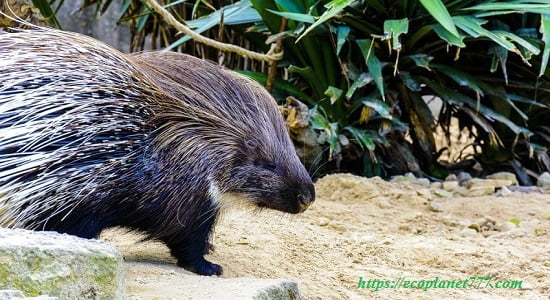 The North American porcupine ( Erethizon dorsatum ) is the largest species in the family. Its weight reaches about 7 kg, length up to 80 cm and tail up to 30 cm. This is the only species that lives in the USA and Canada, and the largest of all. He wears about 30,000 needles on his body. It has large front teeth with which it eats tree bark and stems. It also feeds on fruits, leaves and spring buds.

Leads a nocturnal lifestyle. Can climb trees and swims well. Equips housing in tree hollows, logs or stumps, as well as in caves, rock crevices, burrows or snowdrifts. Individuals living in coniferous forests spend a lot of time on the ground.

Old World porcupines (family Hystricidae) are the smallest member of the family, weighing less than 4 kg and somewhat rat-like in appearance; its length is about half a meter, not counting the tail, which is about half the length of the body.

Other species (living in deciduous and mixed forests) can be seen in trees, which are their main source of food. In spring and summer, their diet includes buds, twigs, roots, stems, leaves, flowers, berries, seeds, and nuts. In winter, evergreen needles become important food sources. Although porcupines do not hibernate during the winter, they remain in their dens during cold or inclement weather.

Reproduction and pregnancy of a porcupine 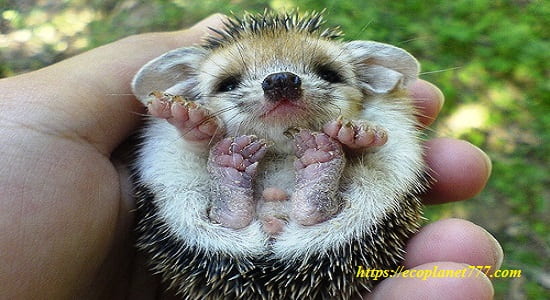 As a rule, they are solitary animals, but sometimes they gather in groups for breeding. They mate in late summer and early autumn.

Many people are interested in the question: “How do porcupines reproduce without damaging each other?” Very carefully, of course! Males compete for the female during noisy fights. The winner then whines and stomps his tail to impress his lady. If she seems interested, he sprays her with urine, which gives her the signal to lower her needles and move her spiny tail (to the side) for mating.

Pregnancy lasts about 200 days. Female porcupines have one to four young, depending on the species. Babies have soft needles at birth that harden within a few days. Babies stay with their mother for only a few months. At two months of age, most young porcupines can live on their own.

The threat of extinction of porcupines

Porcupines have been extirpated from many populated parts of Africa because they ate root crops. People also destroyed them because of the feathers that were used for decorations. The slender-spined porcupine Chaetomys subspinosus is listed as a vulnerable species that has lost its habitat to cocoa plantations in northeastern Brazil. The Philippine porcupine Hystrix pumila is also vulnerable due to the rapid loss of its forest habitat and the pet trade. Both are also hunted for food.