The name reindeer comes from its habitat, i.e. from the word “northern”. There is also another alternative name for the animal – caribou. Wild reindeer can still be found in the wild despite habitat loss and constant climate change. 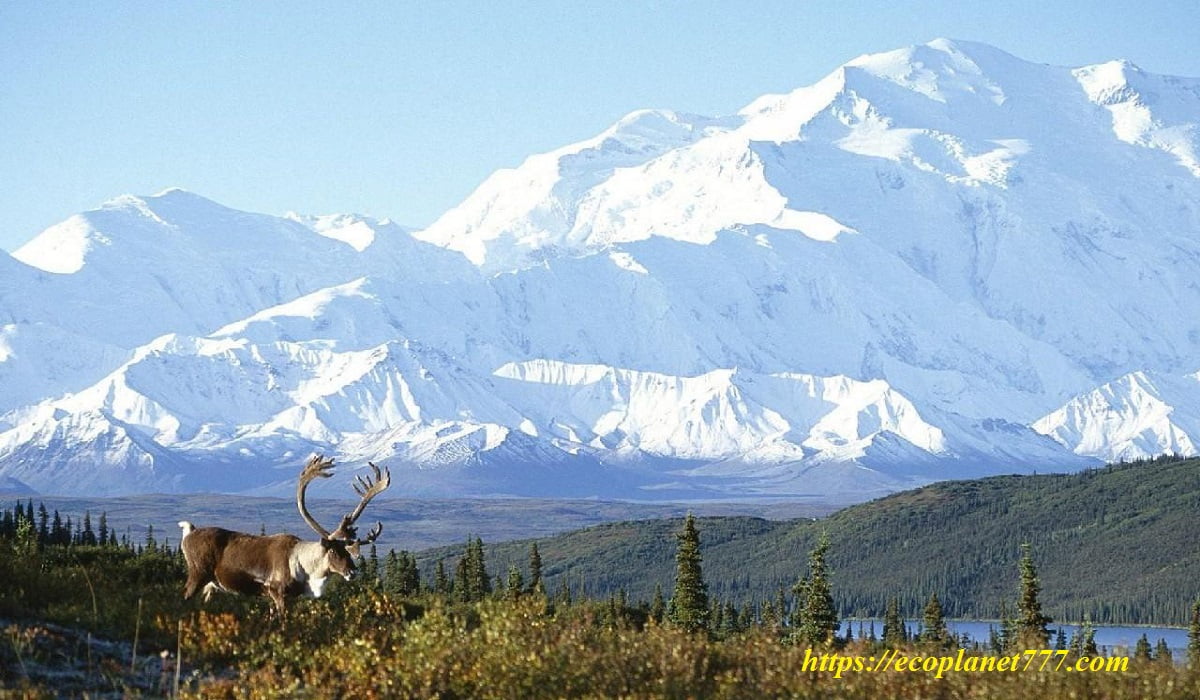 The reindeer is a hardy, strongly built animal that lives in the arctic and subarctic regions of the northern hemisphere.

The body color of the reindeer is quite diverse: all parts of the body are predominantly gray-brown, and the neck and chest are painted in light colors.

Also, the shades of the animal’s coat are quite different depending on the species in question and its habitat. While the fur of some deer is almost white, it is darker in others.

Reindeer live in rather harsh habitats, which is why they have a special coat structure, consisting of two layers.The top ball consists of a long, hollow guard hair, and the bottom layer consists of a shorter, soft undercoat. This double insulated fur coat perfectly warms the animal even in the harshest winters.

Also, the animal has horns, which gives it a special, unusually graceful appearance. It is worth noting that they grow in both sexes. Larger and older deer have larger and heavier antlers. In a male, they can grow up to 130 centimeters in length and weigh up to 15 kg. At the end of the body is a tail 10-25 cm long.

The appearance of a reindeer 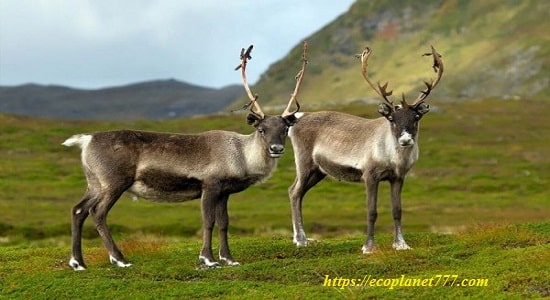 Reindeer have a distinctive appearance due to their antlers, which are worn by both males and females. Part of the horn is shaped like an oar and is used to clear ice and snow. The female half of the herd sheds its antlers closer to spring (or early summer), while the males wear them most of the time and get rid of them in November. Females tend to have smaller horns than males. After shedding, the process of regrowth begins again, but every year they become more complex in their form, because. new shoots appear. So, an animal of five years of age has the most developed horns, because. considered fully adult and sexually mature. While the antlers are growing, they have a velvety covering that disappears when the antlers are fully grown. Their length can reach 1.2 meters in height.

The reindeer’s hooves are specially shaped, thanks to which they get their food from under the deep snow. In summer, the hooves are wide and flat, which provides the reindeer with stability on soft ground. In winter, they become stiffer with a sharp edge that allows them to cut through frozen snow and ice.

The fur of the animal is quite thick, warm and long most of the time, to survive in the harsh conditions of the far north.Moreover, the deer’s wool is hard and has a special internal structure: inside it is hollow or empty, due to which it has a better insulating ability to retain the heat of the animal’s body. The body color of the reindeer in the cold period of time is lighter with some shades of brown. In summer, the fur changes to shorter and softer and varies from brown to gray.

The reindeer’s nose is also covered in hair, which helps to warm the cold air of the environment before it enters the lungs.

The reindeer is a hardy, strongly built animal that lives in the arctic and subarctic parts of the northern hemisphere.
Europe, Asia, and North America are home to a variety of reindeer species of varying sizes, colors, and antler designs.

It is assumed that the domestication of the reindeer in Eurasia took place about 7000 years ago!

Some of the subtle and varied differences between other subspecies can be attributed to domestication. The various subspecies of the reindeer in Eurasia vary in appearance from region to region, from Greenland to Siberia, Scandinavia, etc.Local customs and breeding habits naturally also caused changes in the species. There are still wild reindeer in the furthest corners of Siberia, Norway, Greenland and Finland, but the vast majority of Eurasian reindeer are domestic animals.

The indigenous peoples of Europe and Asia have completely domesticated the reindeer, and their way of life depends on their relationship with the calm and good-natured domesticated reindeer.
In Europe, Scandinavia and Asia, the reindeer is used not only for food and fur, but also for milk, as a beast of burden, as a pet and, of course, for pulling sleds!

For the caribou of Alaska and Canada, such domestication has never occurred. Generally, Alaskan and Canadian Natives do not herd or keep caribou, they simply follow wild herds and hunt individual animals as needed for food and fur. The state of Alaska is home to dozens of herds of wild caribou, and their population is estimated at more than one million individuals.

Where does the reindeer live 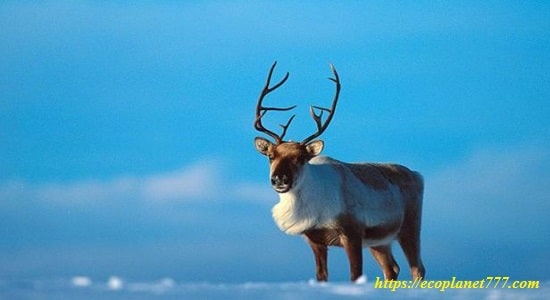 Reindeer is a large mammal that lives in the northern parts of our planet.

Previously, they could be found in many habitats, but at present, this is no longer possible. So, in the United States, the reindeer was found in the south of North America.

In Europe and Asia, it could be found in northern and eastern Europe, Greenland, Russia, Mongolia, and northern parts of China.

Today they are found in Alaska and Canada, North America, as well as in Norway, Greenland, Siberia and Finland. One of the largest and most studied herds lives on the Taimyr Peninsula, in the northernmost part of Russia.

What do reindeer eat

Reindeer are herbivores. In summer they feed mainly on grasses, while in winter they rely on lichens and fungi. These main food sources are supplemented by grasses, sedges, leaves, lichens and mosses.

The main source of food for reindeer in winter is lichen. One of them is even called deer. It is a combination plant made up of fungi and algae living in a symbiotic relationship for better survival.

These interesting organisms are usually incredibly difficult for animals to digest.Caribou are the only large mammals that can digest lichens because they have special bacteria in their intestines.

Moss moss is the most favorite plant that the reindeer eats.

Reindeer are listed in the Red Book by the International Union for Conservation of Nature (IUCN), and are considered as endangered animals. Over the past 27 years, the reindeer population has declined by almost 40%.

These animals have always been hunted throughout their habitat. Reindeer herding is a common practice in many animal habitats. In some areas, people grow them for their milk, which is used to make cheese and yogurt. They are also used for meat. Others use the reindeer as a pack animal to pull sleds or transport goods. In some areas they are also driven. Reindeer are considered the only domesticated deer in the world!

Also, the population of reindeer is affected by predators that constantly prey on these animals. Natural predators of reindeer are bears, mountain lions, coyotes, lynxes, and also gray wolves. Most of the deer that fall prey to predators are sick, weak and old animals, as well as young animals. Half of all born calves are killed by wolves, bears and lynxes.

Reindeer are extremely social creatures. They feed, travel and rest in groups called herds. Herds often move south for distances of 1,600 km to 5,000 km in search of food in the winter. Deer can run at speeds up to 80 km/h. Also, this type of animal can swim across rivers and lakes if necessary. In this he is helped by a special feature of wool, which consists of hollow hairs that provide buoyancy on the water.

The way of life and nutrition of the reindeer is extremely closely related to its habitat. Animals live in extremely harsh conditions, which means constantly searching for food under the snow, even during the dark period of time. It is one of the few animal species that can see ultraviolet light, allowing them to find food in snowy areas, even on dark winter days. Their sense of smell is also incredibly good at helping them find reindeer moss under the snow.

Some subspecies of reindeer make a special sound with their knees – a click. It is believed that this is a special adaptation that allows them to find each other during a snow storm. 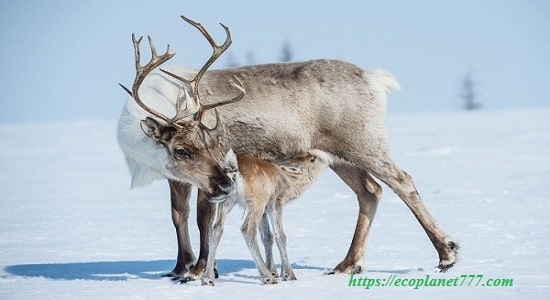 During the breeding season, also known as the rut, males actively compete for dominance. The breeding season begins in August and September, when male reindeer lose the velvet on their antlers, after which they begin to fight for the right to mate with the female. During the autumn rut (breeding) period, wild forest deer gather in herds consisting of one leading male and several females. The male mates with the females and watches over the herd to prevent other males from approaching. The winning males can control a harem of 15 females.

After mating, pregnant females leave the herd and move to calving grounds. They come together to give birth to young in close proximity to each other.

The female will usually give birth to one calf after a gestation period of 210-240 days (about 7.5 months). Sometimes two cubs are born, but this phenomenon rarely happens. At birth, a reindeer cub, called a calf, weighs between 6 and 8 kg. Calves can stand after the first hour of life, and already a week later they eat solid food in addition to mother’s milk.

The young are born around May or June. The calf suckles for only 6 months and then weaned. By the time the cubs are 1 year old, they weigh between 65 and 75 kg.

Females are considered sexually mature as early as 1.5 years.Males, as a rule, do not breed until the age of four, but wait until they have the mass necessary to compete with other males for the right to breed.
Females tend to live longer than males, some reaching 15 years of age, while males are more vulnerable to predation after the breeding season and have an average lifespan in the wild of 4.5 years.