The first park on Earth was the US Yellowstone National Park with unique nature and attractions! It was officially opened in 1872 by special order of President Ulysses S. Grant. But this magical place was known to white people long before that.

The inhabitants of the Indian tribes often told Europeans about the mysterious plateau, where evil spirits live, spitting steam and boiling water and shaking the earth with their furious breath. The natives called it “the land of ice, fire and swirling smoke.” In the second half of the nineteenth century, scientists began to visit the area with increasing frequency, gradually revealing to the world the discouraging geology of Yellowstone.

But, alas, not only scientists came to these places. The looting of the unique nature of the ancient caldera began. For its localization, it was decided to restrict people’s access to this zone. To be honest, managing them was very difficult; the US authorities even had to involve the army and entrust them with the management of the protected area. The park remained under the control of the military for decades, until 1917, when they transferred control to the specially created National Park Service.

Today, Yellowstone welcomes millions of visitors every year! Here you will find an extensive network of highways, about a dozen hotels and campsites, as well as many research and environmental works. A lot of scientific work has been done to preserve and disseminate the nature of this unique corner of the Rocky Mountains.

The Greater Yellowstone ecosystem also includes Grand Teton National Park, grasslands and forests, all of which are protected by the state. There are about 2,000 plant species here. Large areas grow lodgepole pine, whitebark pine, Douglas fir, willow and poplar. A big threat to Yellowstone is the fires that occur here regularly. For example, in 1988, a third of the territory was destroyed by fire. 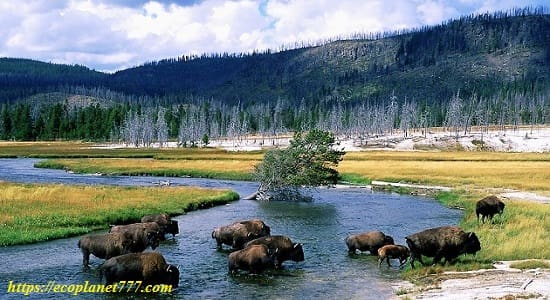 Yellowstone National Park is famous for its rich fauna. It is home to 67 species of mammals, more than 300 species of birds, six species of reptiles, 16 species of fish and four species of amphibians.

Particular attention should be paid to wolves in the biosphere reserve. In the 1930s, the United States had a predator control program. As a result of this program, wolves were virtually wiped out in all 48 states. Over time, the deer population in Yellowstone National Park increased and ate much of the vegetation, including near rivers. As you know, this is extremely important for the formation of soil, as well as the structure of rivers. As a result, the hills began to “slide” down.

In 1995, a decision was made to bring 14 wolves to Yellowstone Park. Thanks to this, it was possible to preserve the ecosystem of the park.By 2001, the number of trees had quintupled, but the deer population had not declined. The wolves have slightly altered the green-loving fallow deer population and changed their behavior. Now the reindeer have begun to choose their pastures more carefully. In addition, thanks to the wolves, the number of jackals has decreased and the number of hares and mice has increased, which in turn attracts eagles, foxes and ferrets. What the wolves did not eat is now eaten by the bears, who used to eat all the berries. As of 2015, the wolf population was 99 out of 10 packs. 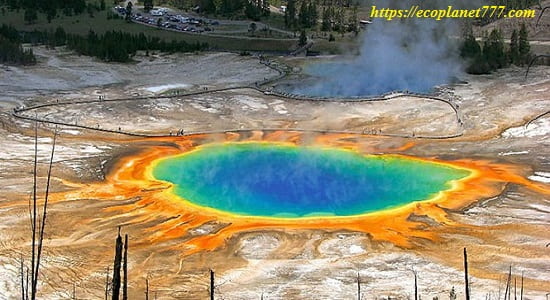 Yellowstone National Park is not only a place with extraordinary landscapes and rich fauna, but also a rather dangerous place. The reason for this is that Yellowstone is home to the world’s largest volcano, a supervolcano. This is a huge depression called the Yellowstone Caldera. This is a place where there is an excess of lava under the earth’s crust and very close to the surface. More than 640,000 years ago, the most terrible eruptions occurred here due to the overflow of lava from magma chambers. A huge depression with an area of ​​​​3825 square km.

Volcanic gases erupt and hot springs rise from the Yellowstone crater. Geophysicists believe that if they watch the explosion of a volcano, it will be worse than in the movie “Apocalypse Now”

There are 3,000 geysers in Yellowstone – half of all geysers on the planet. The largest geysers are the Old Servant and the Giant. The first dumps steam every 53-70 minutes to a height of 42 meters, and the second – every three days to a height of 40 meters.

There are about 10,000 geothermal springs in the country. These include: hydrogen sulfide springs and mud volcano Fumale.

The geothermal pools in the park are like colored puddles that vary in color, chemistry and shape. The multi-colored shades of the pools are the result of the vital activity of algae and bacteria.

What happens if Yellowstone explodes? 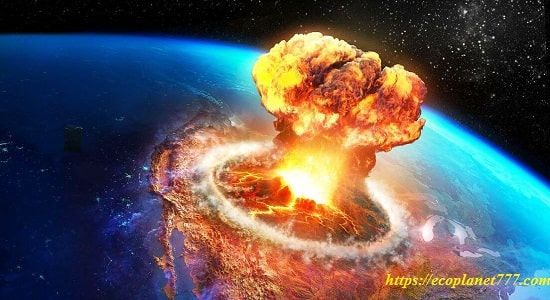 Scientists do not stop predicting the possible consequences of the explosion of a huge crater. This is where the principle of “learning from the past” comes into play. Studies of rocks formed as a result of previous eruptions have shown that during its activity, the supervolcano ejected 1,000 square kilometers of magma into the atmosphere. This would be enough to cover more than half of North America with a 30 cm layer of ash. All living things within a radius of 180 km will die completely, and the number of human victims may reach 87,000. The ash cloud that has risen into the air will block the sun and change the Earth’s climate for decades. Visibility on the surface of the Earth will be no more than 30 centimeters. The chemical composition of the atmosphere will also change, leading to the death of many species.

The excitement around the crater, supported by television and print media, kept scientists’ attention on the geological object. Now the object is monitored by satellites and webcams installed throughout Broken Crater.

Magma is now cooled by heating the rock.Water removes excess temperature. The formation of the famous geysers is the result of this process.

Thus, about 70% of the energy of the magma is extracted. The remaining 30% is used to melt the rock. This process can lead to new eruptions, the only question is when they will occur. The latest monitoring data suggests that the Yellowstone supervolcano is waking up.

The Yellowstone Volcano undoubtedly poses a threat to humanity, but the issue is largely fabricated by journalists. Volcanic craters are widely represented in the culture. British filmmakers shot the film “Supervolcano”, showing the consequences of a hypothetical eruption of the Yellowstone caldera. You can find a documentary about the caldera on YouTube. In 2012, Hollywood filmmakers made a disaster film about a supervolcano, and Dutch musician Arjen Lucassen wrote a song called “Yellowstone Memorial Day.”