Faux Fur vs. Real Fur: Which Is More Sustainable? 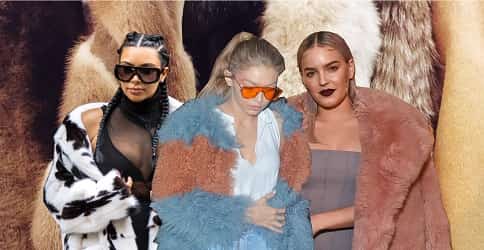 Faux Fur vs. Real Fur Which Is More Sustainable

Putting real fur down a runway in 2019 is almost guaranteed to cause some backlash. After the ’90s saw a wave of animal activists calling real fur immoral, with Naomi C. and Cindy Craw. posing nude for PETA for its “I’d rather go naked than wear fur” campaign in 1994, we are well into the faux-fur era. But now there’s another pressing debate: Is faux fur worse for the environment?

For the purpose of the law, fur is defined as “animal skin or part thereof with hair, fleece or fur fibers attached thereto.” For the purposes of shoppers, that means mink, sable, chinchilla, lynx, fox, rabbit, beaver, coyote and other luxury furs.

Exceptions have been made for cowhide, deerskin, sheepskin and goatskin. Which means that shearling is totally fine.

Brands such as Prada, Burberry, Versace, Michael Kors, Armani, and McCartney have all taken a stand against using real fur. We haven’t stopped wearing fur look-alikes. As people turn to faux fur, the market is producing realistic-looking alternatives. The issue then becomes that most are made from synthetic materials.

So, Fur kills animals, faux fur kills the environment. What is better?

Those are the two sides of the long-running real fur versus faux fur debate. Both sides trying to convince the public of the sustainability and relative merits of their products. The fur industry, however, is at a current low. Search high and low, you will struggle to find any real fur on the high street.

Faux fur has long been thought of as an ethical alternative to the real thing. And, for the most part, it is. When you buy faux, for the most part you know no animal has been harmed, although there have been some notable cases where fur that was sold as fake turned out to be real. Animals living on fur farms spend their time locked up in small cages and can be tortured or cruelly killed, states PETA. (Some farms are regulated by welfare programmes such as Welfur, but several countries have banned them.)

Opting for faux fur should eliminate the animal welfare issue. But it doesn’t remove the planetary impact, especially when bought for a low cost. Popularised in the 1950s, per Fashionista, fake fur tended to be created by chemical companies. And there lies the still-existent problem.

Today’s faux fabric is made up of synthetic fibres; many, including acrylic and polyester, are forms of plastic. Acrylic had the worst environmental impact of nine fibres studied in a 2014 report by the European Commission.